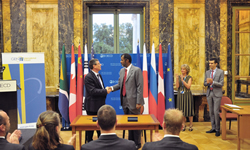 On 27 August 2015, Switzerland signed the ten‑year extension of the Framework Agreement for International Collaboration on Research and Development of Generation IV Nuclear Energy Systems paving the way for its continued collaboration among participating countries in this important area of Gen IV R&D. A signing ceremony was held at the OECD in the presence of Mr Mauro Dell'Ambrogio, Swiss State Secretary for Education, Research and Innovation, and Mr William D. Magwood, IV, NEA Director‑General. The Generation IV International Forum (GIF) is a co‑operative international endeavour which was set up in 2005 to carry out the research and development needed to establish the feasibility and performance capabilities of the next generation of nuclear energy systems.

Joint Declaration on the Security of Supply of Medical Radioisotopes

Belgium has adhered to the Joint Declaration on the Security of Supply of Medical Radioisotopes, bringing the number of adhering countries to 14. The Joint Declaration, which seeks to ensure the security of supply of the most widely used medical radioisotope, molybdenum-99 (Mo-99), remains open to adhesion by additional countries wishing to do so. Read the declaration and see the list of adhering countries: oe.cd/RW 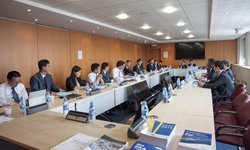 On 1 September 2015, Mr Hu Jinwu, Director of the National Nuclear Emergency Response Technical Assistance Center of the China Atomic Energy Authority (CAEA), and 17 CAEA and other Chinese experts met with Nuclear Energy Agency (NEA) Director‑General Mr William D. Magwood, IV, and senior staff to discuss international nuclear emergency management. Mr Magwood presented the Agency as well as its activities in follow-up to the Fukushima Daiichi nuclear power plant accident. The meeting also provided information on the NEA International Nuclear Emergency Exercise INEX‑5, which has been designed to test national and regional emergency management aspects of notification, communications and interfaces between and among countries and international organisations during the intermediate phase of an accident involving a radiological release from a nuclear power plant deteriorated by a natural disaster. China has been invited to participate. Presentations were also given on other activities involving the NEA and China.

Dr Edward (Ted) Lazo, NEA's Senior Radiological Protection Scientist and Deputy Head of the Division of Radiological Protection and Radioactive Waste Management, and Scientific Secretary of the Committee on Radiation Protection and Public Health (CRPPH), has been honoured with the "Landauer Memorial Lectureship" of the US Health Physics Society (HPS). The honour was awarded in recognition of Dr Lazo's distinguished contribution to the field of radiation health physics. The NEA congratulates Dr Lazo, who has been with the NEA for over twenty years, for this remarkable recognition of his past and ongoing excellent scientific work with and for the NEA committees. 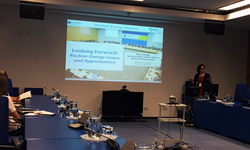 From 24 to 28 August 2015, the NEA took part in the 23rd Women in Nuclear (WiN) Global Annual Conference, which highlighted the vital role played by female professionals in the field of nuclear energy. The conference targeted professionals at all levels in their careers and provided opportunities for networking, exchanging ideas, technical visits to the International Atomic Energy Agency (IAEA) laboratories, Seibersdorf, and to the Zwentendorf nuclear power plant. It also enabled participants to share the most up-to-date information on many of the nuclear power programmes and facilities around the world. As part of the conference programme, the NEA gave a presentation on its activities as well as the importance it gives to gender diversity. The NEA encourages women to join its staff, committees and working groups. It is also exploring ways to propose strategies within its membership for both recruiting and retaining women in nuclear energy activities, and enhancing the availability and quality of tools and role models for women and girls at every stage of their nuclear education and careers. 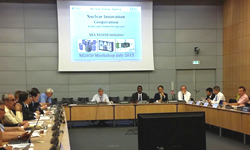 On 7‑8 July 2015, the NEA organised the launch of the Nuclear Innovation 2050 Roadmap NI2050 Initiative with a meeting that brought together 40 representatives of 19 member countries, most of whom carry high‑level responsibilities for nuclear fission research, development and demonstration (RD&D) at the national level. Participants discussed the methodology to define major R&D priorities and gaps with a view to enhancing the long‑term contribution of nuclear fission in a low‑carbon energy future towards 2050 and beyond. The participants agreed to issue a bottom‑up survey to collect information on actual RD&D programmes and infrastructures as a first step. In parallel, it is planned to develop a far‑reaching, visionary set of long‑term priorities for fission RD&D. By comparing these top‑down priorities with the outcomes of the survey, some gaps may be identified, for which co‑operation frameworks will then be discussed.

Besides its recognised contribution to the reduction of CO2 emissions from the power sector, nuclear energy, as a low‑carbon source of both electricity and heat, also has the potential to displace fossil fuel usages in other sectors. District heating, desalination, process heat or hydrogen production are examples of co‑generation applications where nuclear energy can substitute for oil, coal or gas. The NEA Ad hoc Expert Group on the Role and Economics of Nuclear Co‑generation in a Low‑carbon Energy Future (COGEN) has just launched a study on the role of nuclear co‑generation in a low‑carbon energy future and the particular economic challenges its development and deployment pose. A group of experts from 11 NEA member countries and representatives from the International Atomic Energy Agency (IAEA) met from 30 June to 2 July to share and review existing experience of nuclear co‑generation and to discuss the contents of the study. A final report on the study is expected to be issued at the end of 2016.

On 6 July 2015, the Inaugural Session of the 9th mandate of the European Nuclear Energy Tribunal (ENET) was held under NEA auspices. The Tribunal consists of seven independent judges appointed for five years by decision of the OECD Council and has jurisdiction over disputes between states parties to the Paris Convention on Nuclear Third Party Liability or the Brussels Convention Supplementary to the Paris Convention concerning the application or interpretation of these Conventions. The seven countries that nominated judges for the 9th term of office are Austria, Denmark, France, Greece, Ireland, Sweden and Switzerland. The mandate of the judges took effect on 1 January 2015. Read more on the ENET at oe.cd/15O, and on the Paris and Brussels Conventions at oe.cd/15P. 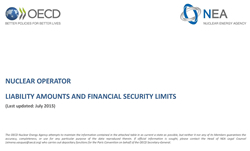 The NEA has recently updated its Table on Nuclear Operator Liability Amounts and Financial Security Limits. The table attempts to provide information on the applicable nuclear liability amounts and related financial security obligations imposed on nuclear operators in a wide range of countries, including non‑OECD or non‑NEA countries, in case of a nuclear incident in a nuclear installation. The table, which is not official but rather for information purposes, can be downloaded at oe.cd/15N. 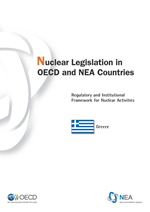 The NEA has updated, in co‑ordination with the Greek delegation to the OECD, the report on the Regulatory and Institutional Framework for Nuclear Activities of Greece. The NEA country reports provide comprehensive information on the regulatory and institutional framework governing nuclear activities in OECD and NEA member countries. Each country profile provides a detailed review of a full range of nuclear law topics, including: mining regime; radioactive substances; nuclear installations; trade in nuclear materials and equipment; radiation protection; radioactive waste management; non-proliferation and physical protection; transport; and nuclear third party liability. The report on Greece is available for download at oe.cd/15M.