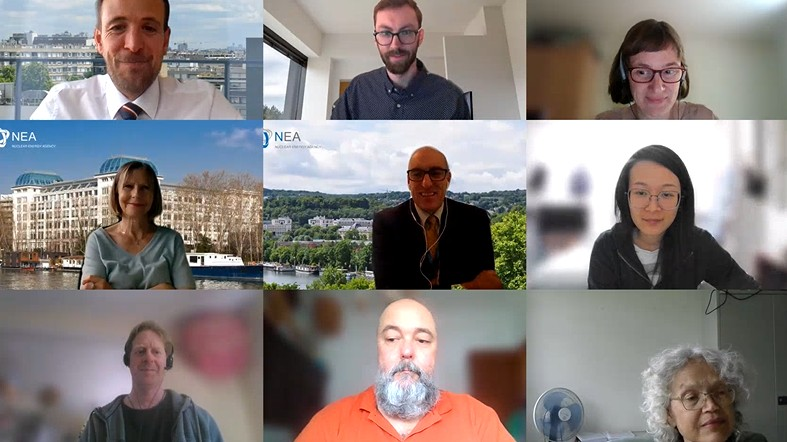 Participants at the kick off meeting to establish the Expert Group on the Sixth International Nuclear Emergency Exercise (EGINEX6), 16 May 2022

The Nuclear Energy Agency this month made progress on two activities that seek to bolster member countries’ nuclear and radiological emergency preparedness and their ability to co-ordinate response actions.

Preparations are underway for the next International Nuclear Emergency Exercise (INEX), a series that is being developed under the auspices of the NEA Committee on Radiological Protection and Public Health’s (CRPPH) Working Party on Nuclear Emergency Matters (WPNEM). The series addresses the specific needs of participating countries to test arrangements and provides a basis for enhancing national and international emergency preparedness.

The INEX series began in 1993 and has been a key tool to act on lessons learnt. The last exercise, in 2015-2016, focussed on notification, communication and the interfaces between countries when challenged by catastrophic events involving environmental releases of radioactive materials.

Preparations for the next exercise, INEX-6, will be overseen by the recently established Expert Group on the Sixth International Nuclear Emergency Exercise (EGINEX6). The group held its kick off meeting on 16 May 2022 and is made up of experts from 11 member countries and invitees from Chinese Taipei. It was agreed that INEX-6 will focus on exercising the long-term recovery phase of radiological and nuclear emergencies, specifically modular arrangements for various topical issues necessary to manage existing exposure situations. INEX-6 is provisionally scheduled to take place in September 2023.

The scope of the exercise will be discussed at the NEA’s Preparedness for Post-Nuclear Accident Recovery Workshop on 27-28 October 2022. The event will also provide an opportunity for delegates to learn about the NEA’s recently published report Building a Framework for Post-Nuclear Accident Recovery Preparedness and how elements can be tested through INEX-6.

Meanwhile, the NEA Expert Group on Comparison and Understanding of Dose Prognosis (EGDP) held a workshop on 19 May 2022 on improving international understanding of the factors that might influence dose prognosis, and therefore protective actions, in case of emergency.

Participants compared and analysed the outputs of three internal international exercises the NEA ran in 2021.

The exercises were developed and implemented in levels from “easy” to “difficult”:

In all, 15 experts from 11 NEA member countries and 1 invited expert from Hong Kong, China, attended the workshop. The participants compared the protective actions taken during each of  the three exercises and analysed the differences between national approaches, as well as the reasons behind these differences. Deviations in results in terms of the evolution in space and time of environmental radionuclide concentrations (e.g., in air, soil) among countries mainly originate from the source term estimation, meteorological input data and atmospheric transport model assumptions.

The EGDP plans to publish a report on its findings in spring 2023.