International co‑operation on the future of nuclear energy 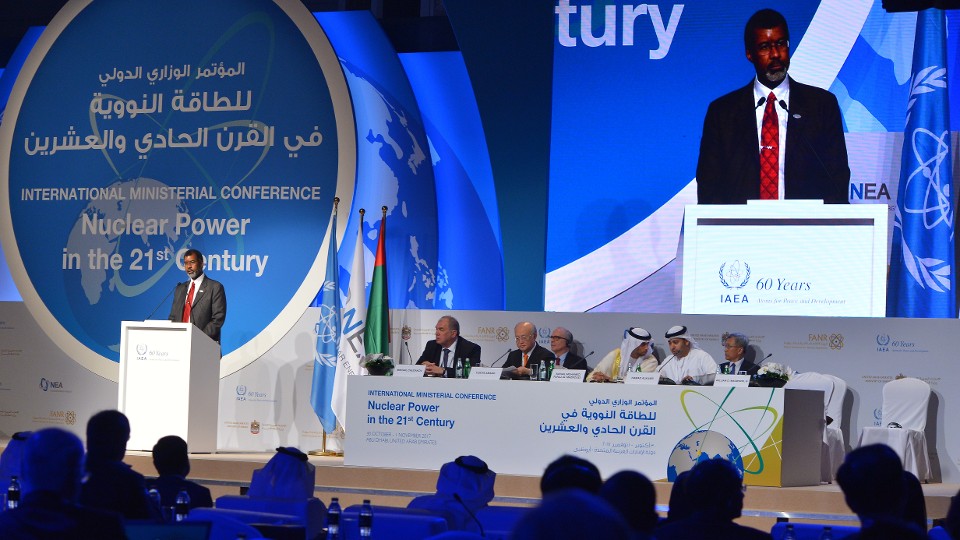 Over 600 participants from 67 countries and five international organisations have come together in Abu Dhabi, United Arab Emirates, to discuss the future of nuclear energy at the International Ministerial Conference on Nuclear Power in the 21st Century from 30 October to 1 November 2017. The event is organised by the International Atomic Energy Agency (IAEA), in co‑operation with the NEA, and hosted by the Government of the United Arab Emirates through the Ministry of Energy and the Federal Authority for Nuclear Regulation.

During his opening remarks, Mr Magwood noted that the world will need to use as many tools at its disposal as possible to stabilise the future global energy framework and that nuclear energy is one of these tools able to address climate change, air pollution and energy supply security. He also stressed the complementary roles of nuclear power and renewable energy, recalling that "these two technologies, when used together, provide an efficient combination for a decarbonised as well as secure electricity system."

"Two years after the Paris agreement, the path towards a low‑carbon energy future is still uncertain," said Mr Magwood. "International co‑operation can no doubt ease the path forward toward a clean, affordable and secured energy by addressing collectively the major technical, economic and political challenges with a focus on both today and the future."

The NEA and the IAEA also held a joint side‑event on Facilitating International Cooperation on Nuclear Power on 31 October 2017. During this side‑event, Mr Mikhail Chudakov, Deputy Director General and Head of Nuclear Energy Department, IAEA, Mr Daniel Iracane, Deputy Director‑General and Chief Nuclear Officer, NEA, and Mr Grzegorz Rzentkowski, Director, Division of Nuclear Installation Safety, IAEA, discussed the support each organisation provides to its membership and the impact of their activities related to the safe and sustainable use of nuclear power in the 21st century.

The Nuclear Energy Agency (NEA) is an intergovernmental agency which operates under the framework of the Organisation for Economic Co‑operation and Development (OECD). It facilitates co‑operation among countries with advanced nuclear technology infrastructures to seek excellence in nuclear safety, technology, science, related environmental and economic matters and law. The mission of the NEA is to assist its member countries in maintaining and further developing, through international co‑operation, the scientific, technological and legal bases required for a safe, environmentally sound and economical use of nuclear energy for peaceful purposes. It strives to provide authoritative assessments and to forge common understandings on key issues as input to government decisions on nuclear technology policies. NEA membership includes 33 countries that co‑operate through joint research, consensus‑building among experts and development of best practices.