The NEA completed, under Nuclear Regulatory Commission (NRC) sponsorship, a pressurised water reactor (PWR) Main Steam Line Break (MSLB) Benchmark against thermal-hydraulic/neutron kinetics codes. Another OECD/NRC coupled code benchmark had been initiated for a boiling water reactor (BWR) turbine trip (TT) transient. During the course of defining and co-ordinating the OECD/NRC PWR MSLB and BWR TT benchmarks, a systematic approach had been established to validate best-estimate coupled codes. This approach employed a multi-level methodology that not only allowed for a consistent and comprehensive validation process, but also contributed to determining additional requirements as well. It also prepared a basis of licensing application of the coupled calculations for a specific reactor type and developed safety expertise in analysing reactivity transients. Professional communities had been established during the course of the benchmark activities that allowed in-depth discussions of the different aspects of assessing neutron kinetics modelling for a given reactor and how to implement best-estimate methodologies for transient analysis using coupled codes. The above examples demonstrated the benefit of establishing such international coupled standard problems for each type of reactor.

Further continuation of the above activities was the development of a VVER-1000 coolant transient (V1000CT) benchmark set, which defined coupled code standard problems based on actual plant data. The overall objective was to assess computer codes used in the safety analysis of VVER power plants, specifically for their use in reactivity transients in VVER-1000. In performing this work, Pennsylvania State University (PSU), the United States and CEA/DEN (France) collaborated with Bulgarian organisations, in particular with the Institute of Nuclear Research and Nuclear Energy (INRNE) and the Kozloduy nuclear power plant (KNPP).

The V1000CT benchmark set consisted of two parts: 1) V1000CT-1, which is a simulation of the switching on of one main coolant pump (MCP) when the other three MCPs are in operation; and 2) V1000CT-2, which is a calculation of coolant mixing experiments and a main steam line break (MSLB) transient. Each of the two parts contained three exercises as detailed below.

The reference problem chosen for simulation in the VVER-1000 was a main coolant pump (MCP) switching on when the other three main coolant pumps were in operation. It was an experiment that was conducted by Bulgarian and Russian engineers during the plant-commissioning phase at the Kozloduy NPP Unit 6 as a part of the start-up tests. The test was done because it was important for the safety of the nuclear power plant (NPP) with VVER-1000, model 320. The reactor had an average core exposure of 30.7 EFPD and boron concentration 5.95 g/kg H2O at the beginning of cycle (BOC). At the beginning of the experiment, there were three pumps in operation: 1st, 2nd and 4th main coolant pumps and the reactor power was at 29.45% of the nominal power level according to the equipment that measured the neutron flux. MCPs 1, 2 and 4 were operating under stable conditions and MCP 3 was out of operation. The initial conditions were as follows: The average inlet temperature in the reactor core was about 555.00 oK. The temperature differences between the hot and cold legs for the loop with working MCPs varied between 8.3-11.5 oK while the same temperature difference for loop 3 with the MCP out of operation was –3.6 oK. The total mass flow through the core was about 13611 kg/s with an average flow of 5000 kg/s through each of the working loops and negative (reverse) flow of –1544 kg/s in loop 3. There was a core axial non-symmetry as could be seen from the value of the axial offset of the core power distribution at the initial state – 28.5 %. Control rod group 10 was inserted into the core at about 36% of the reactor core height. Analysis of the initial 3-D relative power distribution showed that this insertion introduced axial power asymmetry in the core. At the beginning of the transient, there is also a radial thermal-hydraulic asymmetry coming from the colder water introduced in ¼ of the core when MCP 3 was switched on. This caused a spatial asymmetry in the reactivity feedback, which was propagated through the transient and combined with insertion of positive reactivity.

In summary, this event was characterized by a rapid increase in the flow through the core resulting in a coolant temperature decrease, which was spatially dependent. This lead to the insertion of spatially distributed positive reactivity due to the modelled feedback mechanisms and non-symmetric power distribution. Simulation of the transient required evaluation of core response from a multi-dimensional perspective (coupled three-dimensional neutronics/core thermal-hydraulics) supplemented by a one-dimensional simulation of the remainder of the reactor coolant system.

Definition of the V1000CT-1 Benchmark exercises

The benchmark consisted of three exercises:

In addition, an extreme version of exercise 3 was defined as follows: the control rod of group 10 located in the sector of the core cooled by MCP 3 was ejected after switching on of the MCP 3. The ejection of the rod began at the 13th second of the transient and the velocity of ejection was 17.75 m/sec. The scram was activated upon reaching the high neutron flux set point, which was 107% of the initial level. This extreme scenario developed very peaked spatial power distribution and nonlinear asymmetric feedback effects. It was designed to test and better compare the predictions of coupled 3-D kinetics/thermal-hydraulic codes.

The benchmark specifications for the first phase included a complete set of the initial and boundary conditions that were needed for the participants to perform the aforementioned three exercises.

The OECD/NEA and AER coupled code benchmarks for light water reactors markedly contributed to the testing of best-estimate coupled codes in reactivity transients. At the same time, these benchmarks and flow mixing studies indicated that further improvement of the mixing computation tools in the integrated codes was necessary. For this purpose, the coolant mixing and main steam line break (MSLB) benchmark for VVER-1000 (V1000CT-2) was defined. The reference nuclear plant was Kozloduy-6 and the multi-level testing approach was employed. Measured data from NPP mixing experiments and code-to-code comparison were used to validate the reactor vessel thermal-hydraulic models. The improved coupled codes were be tested in asymmetric MSLB transients with complex core-plant interactions.

Plant measured data from VVER-1000 coolant mixing experiments were used to test and validate vessel mixing models (CFD, coarse-mesh and mixing matrix). The task was to compare the various calculations with measured data, using specified-vessel boundary conditions and core power distribution. The validated models were used to analyse the main steam line break (MSLB) transient. The experiments included single loop cooling down or heating-up by disturbing the heat transfer in the steam generator (SG) through the steam valves, at low reactor power in the range of 5-14% with all MCPs in operation. They were conducted during the plant commissioning phase at Kozloduy-6, and Kalinin-1 and 2.

The transient analysed was initiated by a main steam line break in a VVER-1000 between the steam generator (SG) and the steam isolation valve (SIV), outside the containment vessel. The event was characterised by a large asymmetric cooling of the core, stuck control rods and large primary coolant flow variations.

Because of a possible return to power and criticality after reactor scram due to overcooling, the main objective of the study was to clarify the local 3-D feedback effects depending on vessel mixing. Special emphasis was put on testing 3-D vessel thermal-hydraulics models and the coupling of 3-D neutronics/vessel thermal-hydraulics. For the purpose of this benchmark, two versions of the MSLB scenario were defined. The first scenario was taken from current licensing practice and the second was derived from the original one using aggravating assumptions to enhance the code-to-code comparison.

The original scenario was based on conservative assumptions that maximised the consequences for a return to criticality:

Other major assumptions were that off-site electric power was available, the main coolant pump (MCP) of the affected loop tripped, the other MCP operated normally during the transient and the pressuriser was connected to the affected loop.

The second scenario was derived from the original one by assuming that all MCPs remained in operation and the scram worth was additionally reduced through adjustment of the absorber cross-sections.

Definition of the V1000CT-2 Exercises

The benchmark consisted of three exercises

Note: point kinetics plant simulation could be added upon request of the participants.

Data related to V1000CT can be requested from the NEA Data Bank:

The goal of the Benchmark for Uncertainty Analysis in Best-Estimate Modelling for Design, Operation and Safety Analysis of Light Water Reactors (LWR-UAM) is to determine the uncertainty in light water reactor (LWR) systems and processes in all stages of calculations. It is estimated through a simulation process of ten exercises in three phases provided by the benchmarking framework.

The expert group provided advice to the Working Party on Scientific Issues of Reactor Systems (WPRS) on the scientific development needs (data and methods, validation experiments, scenario studies) of sensitivity and uncertainty methodology for modelling of different reactor systems and scenarios. It was completed in 2020 and the topic is currently addressed in the Working Party on Scientific Issues and Uncertainty Analysis of Reactor Systems (WPRS).

This benchmark incorporated full 3-D modelling of the reactor core into system transient codes for best-estimate simulations of the interactions between reactor core behaviour and plant dynamics and their testing on a number of transients of importance for plant behaviour and safety analysis.

A number of tests with detail well documented neutronics and thermal-hydraulics measurements data have been performed at the Rostov Unit 2 (Rostov-2) nuclear power plant (NPP). The reactor type is a VVER-1000 with fuel assemblies of type TBC-2M, which enable an 18-month fuel cycle length. 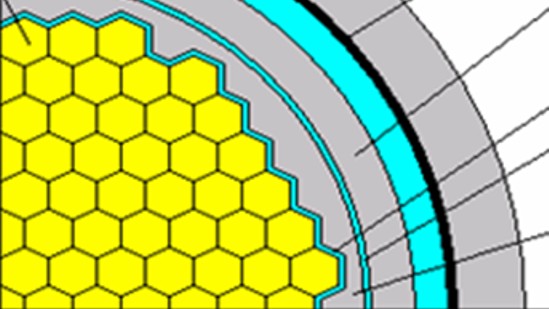 The Subgroup on Uncertainty Analysis in Modelling (UAM) for Design, Operation and Safety Analysis of Sodium-cooled Fast Reactors (SFR-UAM) was formed to check the use of best-estimate codes and data.

Working Group on Analysis and Management of Accidents (WGAMA)

The Working Group on the Analysis and Management of Accidents (WGAMA) is responsible for activities related to potential accidental situations in nuclear power plants, including the following technical areas: reactor coolant system thermal-hydraulics; design-basis accidents; pre-core melt conditions and progression of accidents and in-vessel phenomena; coolability of over-heated cores; ex-vessel corium interaction with coolant and structures; in-containment combustible gas generation, distribution and potential combustion; physical-chemical behaviour of radioactive species in the primary circuit and the containment; and source term. The activities mainly focus on existing reactors, but also have application for some advanced reactor designs. Priority setting is based on established CSNI criteria and in particular on safety significance and risk and uncertainty considerations.