Moreover, as a follow-up to the INEX-3 exercises a series of meetings were held and several documents were published. These events also had an impact on the INEX-4 exercises. First, on 12-14 October 2010 in Bethesda, Maryland, United States, the Workshop on Practices and Experience in Stakeholder Involvement for Post-nuclear Emergency was organised by NEA as a follow-up to the INEX-3 series. Two expert groups – the Expert Group on Recovery, Food and Agriculture, and the Expert Group on Countermeasures – dealt with different but complementary aspects of strategies for countermeasures in the post-crisis phases of an emergency situation. Their work resulted in a combined report on Strategic Aspects of Nuclear and Radiological Emergency Management , published in 2010.

The INEX-4 series was developed in 2008 and conducted throughout 2010 and 2011 with 17 participating countries using the INEX-4 scenario for an event involving a radiological dispersal device (RDD). An INEX-4 evaluation questionnaire was developed t document the process and results of the exercise, which was designed mainly to test emergency responses/actions related to consequence management and transition to recovery. After the approval of INEX-4 exercise report by the WPNEM during its 36th meeting in November 2012, the WPNEM decided to organise a topical session based on the issues arising from the questionnaire sent to countries having held INEX-4 exercises. The topical session was held in connection with 37th WPNEM meeting on 14 May 2013 in Paris. It was meant to identify possible topics for future work based on INEX-4 experience.

An event of an important significance took place on 11 March 2011 – the Fukushima Daiichi nuclear power plant accident, where participants of INEX-4 were in various stages of the performing the exercise at the time. Thus, this event was also taken into account in the final evaluation of the exercise.

INEX-4 was developed around a single scenario based on a contamination footprint arising from malicious use of a radiological dispersion device in an urban environment. The start of INEX-4 exercise play was clearly identified as being after the crisis/early phase ended. Additionally, to ensure an efficient investigation of the topical areas over the extended times associated with the post-crisis situation as well as a common evaluation basis, INEX-4 was designed as an issues-driven table-top exercise conducted individually by each participating country. Players were challenged to fully investigate the issues and develop their plans for managing the consequences and the transition to recovery in response to the topical areas and associated scenario developments.

While issues related to crisis management were inevitably discussed during the exercise, crisis phase play was considered out of scope of the INEX-4 framework and technical materials were not developed to support such play. Criminal justice aspects associated with a malicious event were also considered to be out of scope of the exercise framework. However, this did not preclude individual countries from including these in their own exercises in a manner consistent with the overall exercise framework.

The main goal of INEX-4 was to allow participating countries to test or identify elements for improving their arrangements for consequence management and transition to recovery in response to a malicious event involving dispersion of radioactive materials in the urban environment. Based on key objectives, the exercise included the following specific topical areas:

INEX-4 mainly addressed the phases of the EPR highlighted in the chart below. 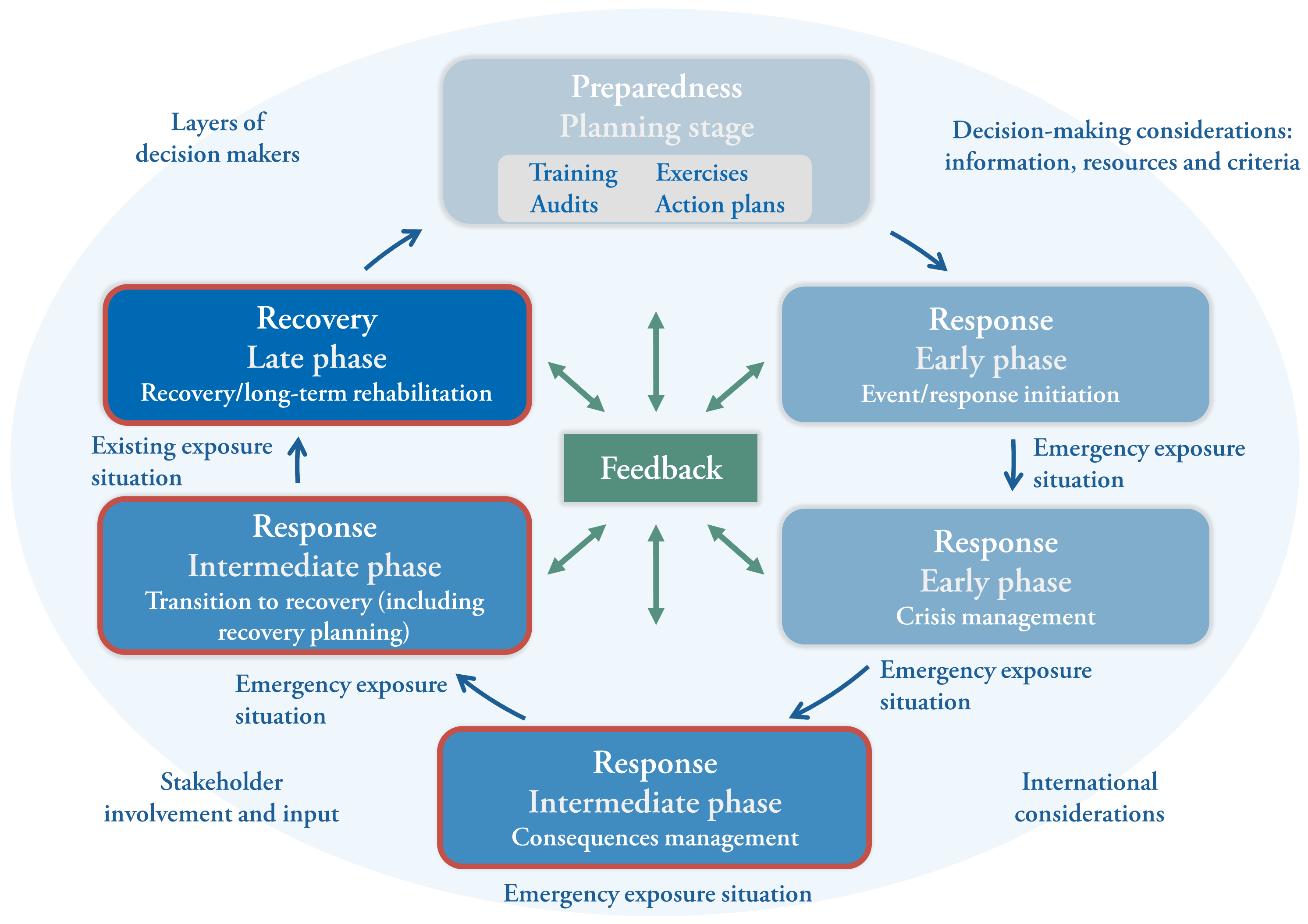 The INEX-4 conclusions were evaluated in the report, indicating good practices and improvement opportunities in nine areas:

A detailed and well-structured evaluation may be found in the INEX-4 report, however the main outcomes were concerned with the fact that the radiological protection issues of emergency management originating from an urban RDD scenario are broadly similar to large-scale nuclear emergencies. The area of improvement or further development lies with the contingency plans. Moreover, some obstacles were identified in decision making in the face of professional differing opinions. Aspects of optimisation strategies, handling of the technological resources, public communication, costs handling and transition to recovery processes were also studied by INEX-4 participants.

Moreover, it should be noted that given that some countries completed their table-top/workshop discussions after the events of the March 2011 Great East Japan Earthquake, it is possible that responses and interdepartmental connections could have changed drastically. However, some countries felt more prepared to respond to the March 2011 events due to the INEX-4 exercises. For example, several Canadian department participants felt that they were better connected and knew who to call during the Japan emergency as a result of the connections established or re-established during the exercise.

Norway conducted its INEX-4 exercise as part of a larger national exercise in November 2010 with an RDD scenario in downtown Oslo. About eight months later, a bomb was detonated in the same area killing eight people and destroying most of the government buildings only 800 metres away from where the INEX-4 scenario was conducted. The bomb contained no radioactive materials, but the lessons learnt from the exercise a few months earlier were considered useful in response to a real event.