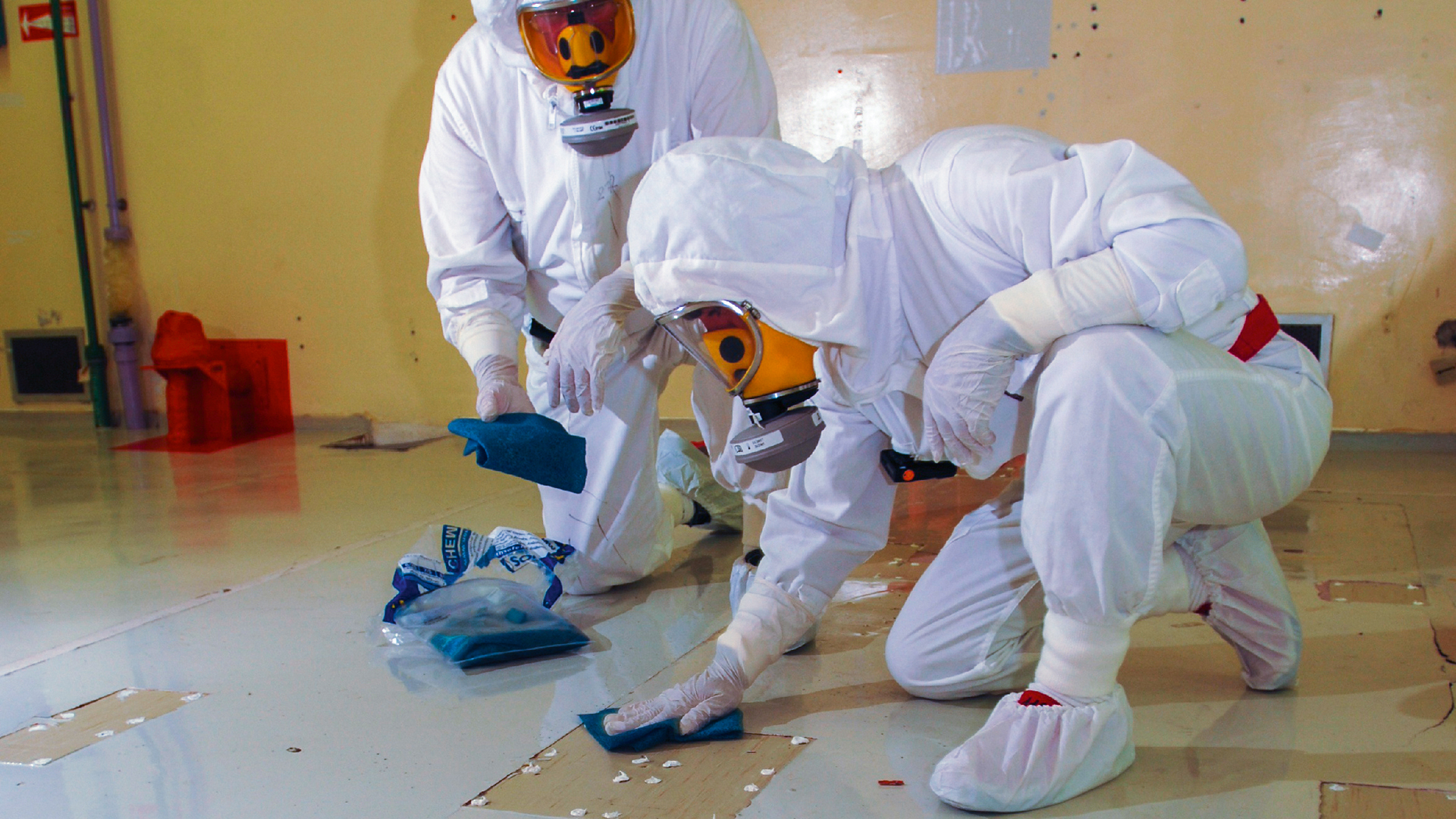 The NEA has no statutory operational role in the response to nuclear emergency situations. However, the NEA has for many years been actively involved in efforts to improve the international aspects of nuclear or radiological accident emergency, preparedness and response through the development, conduct and evaluation of the International Nuclear Emergency Exercise (INEX) series. More recently the scope was enlarged to embrace preparedness for recovery.

The mission of the CRPPH Working Party on Nuclear Emergency Matters (WPNEM) is to improve nuclear emergency management systems within member countries, and to share its knowledge and experience widely. Within this framework, WPNEM activities focus on identified needs in preparedness and response for the "early" and "intermediate" phases of a nuclear/radiological emergency (including accidents and consequence management for malicious acts), with a view to prepare appropriate recovery actions. The programme of work is developed in co-ordination with member countries and other international organisations.

From the beginning, the NEA's focus of work as carried out by the WPNEM has been on improving the effectiveness of international nuclear emergency preparedness and response. Part of its work programme focuses on exploring and developing new concepts and future procedures to enhance national and international preparedness and response management. A key aspect of these efforts has centred on preparing, conducting and evaluating the INEX exercises series, which has been organised by the WPNEM since 1993. The experiences and lessons learnt from these exercises have provided a substantial basis for the development of subsequent strategies and recommendations for improving emergency management systems nationally and internationally.

Co-operation and co-ordination with other international organisations

The field of emergency preparedness and response (EPR) is broad, complex and involves many stakeholders. In this framework, the WPNEM seeks international collaboration on specific emergency matters of interest to NEA member countries in the framework of the NEA Strategic Plan and the CRPPH Mandate. For this, the WPNEM works in close co-operation, as appropriate, with other NEA Standing Technical Committees and NEA divisions, as well as competent bodies within relevant OECD directorates and other international organisations active in the field of emergency preparedness, response and transition to recovery.

The WPNEM seeks good co-operation and co-ordination with other international organisations, and works efficiency by identifying areas of synergetic effort and optimises resources by clarifying roles, responsibilities and relevant activities to avoid duplication. International organisations such as the European Commission (EC), the International Atomic Energy Agency (IAEA), World Health Organization (WHO), World Meteorological Organization (WMO), and the United Nations Office for the Coordination of Humanitarian Affairs (UN-OCHA), and the North American Treaty Organization (NATO) are invited to join the WPNEM as observers. In general, representatives from the IAEA and the WHO attend meetings and participate in discussions.

As part of the OECD, the WPNEM is strategically well placed to share information and to foster an integrated all-hazards approach to EPR through co-ordination with relevant OECD bodies, and other relevant organisations. In addition, the WPNEM will continue its long collaboration on nuclear and radiological EPR with the IAEA, the EC and WHO, and will liaise, as appropriate, with the industry and relevant stakeholders.

In the framework of NEA’s active involvement and efforts to improve nuclear accident emergency planning, preparedness and response management at the international level, the NEA is a member of the Inter-Agency Committee on Radiological and Nuclear Emergencies (IACRNE). The committee is the co-ordination mechanism among relevant international intergovernmental organisations to ensure that co-ordinated and consistent arrangements and capabilities for preparedness and response to nuclear or radiological incidents and emergencies are developed and maintained. As a committee member, the NEA is one of the sponsoring organisations of the Joint Radiation Emergency Management Plan (JPLAN) of the IACRNE. The WPNEM Secretariat is the NEA representative in the IACRNE.

The 2017 edition of the JPLAN, in case of a nuclear/radiological accident, notes that the NEA has agreed to accomplish the following tasks:

During the planning phase of an international nuclear emergency exercise, the IACRNE co-ordinates the different objectives of the various international organisations in the United Nations family concerned: the IAEA, the Food and Agriculture Organization of the United Nations, UN-OCHA, WHO and WMO. The IAEA serves as secretariat to the IACRNE. The EC and the Nuclear Energy Agency also participate in the IACRNE. The objectives of the WPNEM are communicated to the IACRNE by the NEA representative at IACRNE, or through the IACRNE Working Group on Joint International Exercises.

The NEA, through the WPNEM, participates, as appropriate, in the development, planning, preparation and organisation of international nuclear emergency exercises, jointly sponsored by the IAEA, the EC, the WHO, the WMO, the NEA and any other interested international organisations.

History and organisational structure within the NEA

The NEA Committee on Radiation Protection and Public Health (CRPPH) has been addressing nuclear emergency matters for some time. The Expert Group on Nuclear Emergency Matters was created in 1993 following the completion of the first International Nuclear Emergency Exercise (INEX) to address exercise lessons. Expert Groups are product oriented and term limited, with mandates that are, in general, valid for 1.5 to 2 years. After several mandate renewals, in 2000 the CRPPH agreed on the long-term value of nuclear emergency matters, and changed the Expert Group into a Working Party, a type of group that is theme oriented and mandate renewable every three years, if appropriate. The WPNEM has since had its mandate updated and renewed seven times.

The Chairman of the Working Party regularly reports to the CRPPH on the current status of the work programme, on achievements made, and on future projects and objectives, including a long-term perspective. The CRPPH is invited to discuss and approve the work programme and the achievements made. In addition, the CRPPH members can express their ideas and priorities in the area of nuclear emergency, preparedness and response management and assist the working party in establishing its long-term objectives. 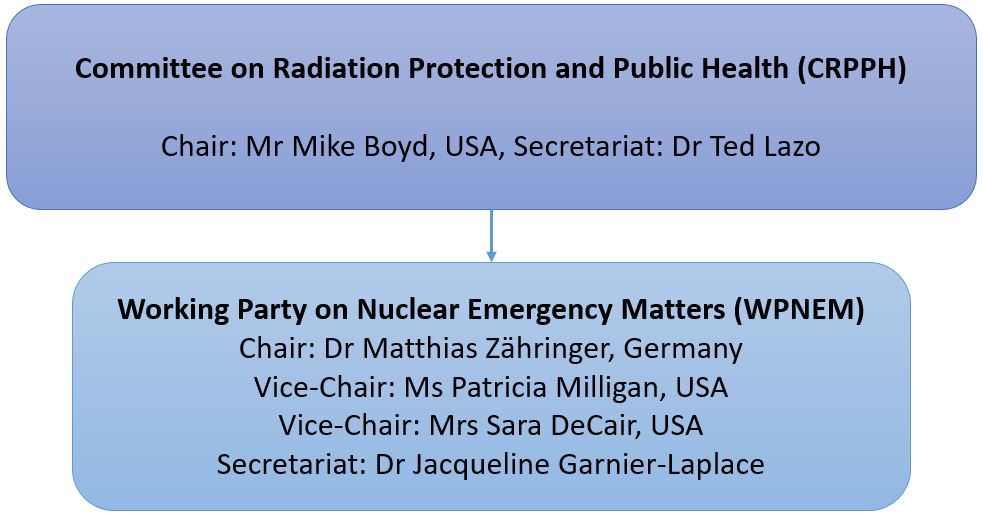 On 11 March 2011, a massive earthquake of magnitude 9.0 on the Richter scale jolted the eastern coast of Japan. An hour after the earthquake, a 14-15 m tsunami, as estimated at the Fukushima Daiichi site, hit the Pacific coastline and led to a terrible loss of lives (approximately 19 000 people died or remain unaccounted for). It also led to loss of all onsite power sources resulting in serious accidents at the three operating Fukushima Daiichi units, which were classified by the Japanese authorities as level 7 on the International Nuclear and Radiological Event Scale (INES).

Working Group on Analysis and Management of Accidents (WGAMA)

The Working Group on the Analysis and Management of Accidents (WGAMA) is responsible for activities related to potential accidental situations in nuclear power plants, including the following technical areas: reactor coolant system thermal-hydraulics; design-basis accidents; pre-core melt conditions and progression of accidents and in-vessel phenomena; coolability of over-heated cores; ex-vessel corium interaction with coolant and structures; in-containment combustible gas generation, distribution and potential combustion; physical-chemical behaviour of radioactive species in the primary circuit and the containment; and source term. The activities mainly focus on existing reactors, but also have application for some advanced reactor designs. Priority setting is based on established CSNI criteria and in particular on safety significance and risk and uncertainty considerations.

The main mission of the Working Group on Human and Organisational Factors (WGHOF) is to improve the understanding and technical basis for treating human and organisational factors within the nuclear industry in order to support the continued safety performance of nuclear installations, and improve the effectiveness of regulatory practices, in NEA member countries.

The Working Group in Public Communication of Nuclear Regulatory Organisations (WGPC) provides a forum for nuclear regulatory organisation communicators and outreach officers to exchange information, experience, and practices. It also aims to exchange views regarding the policies of nuclear regulatory organisations in the area of public communication and identify ways of promoting efficient collaboration between member-countries.