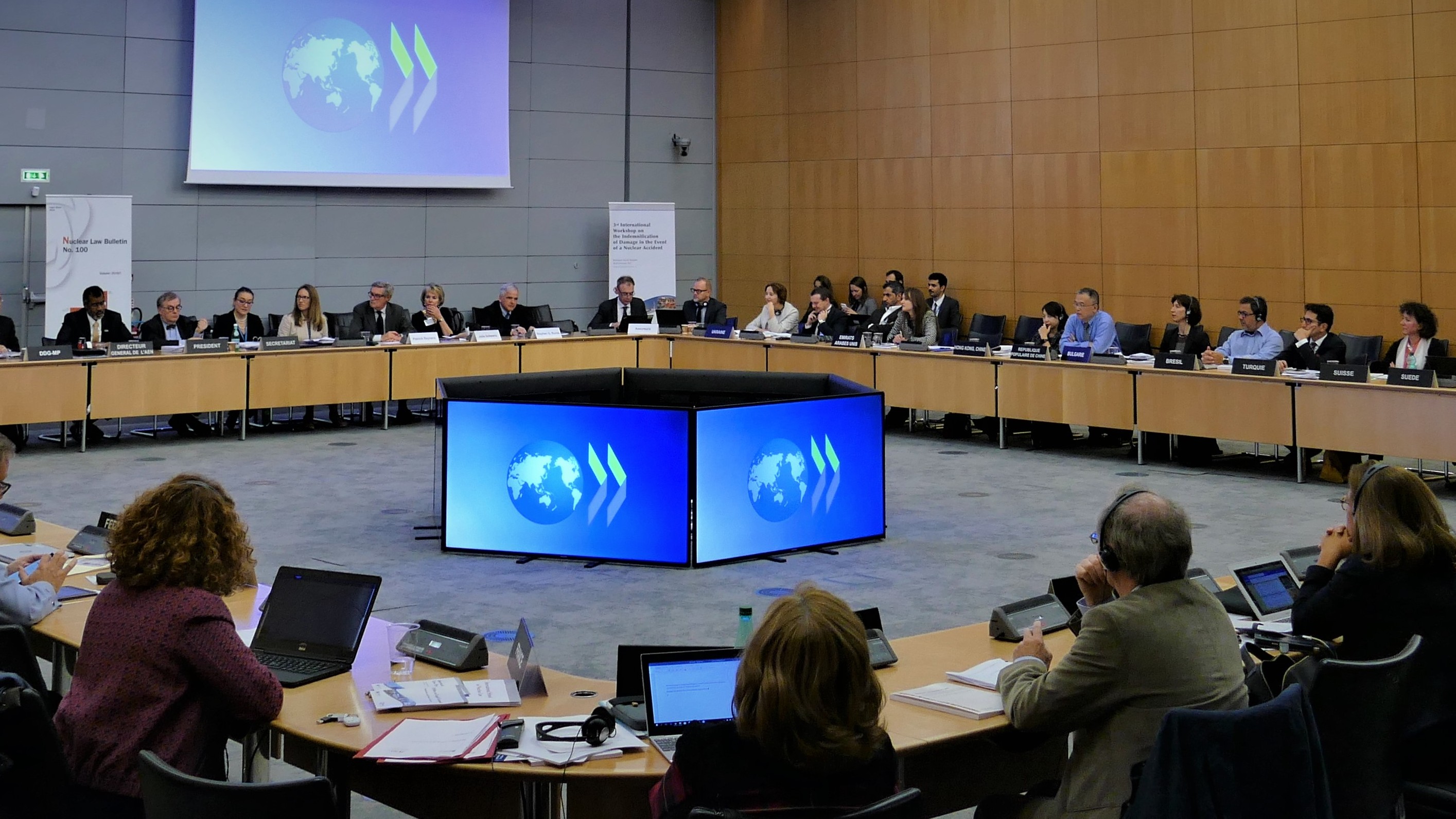 A meeting of the Nuclear Law Committee (NLC) (November 2018).

The Nuclear Law Committee (NLC) was created in 1957, prior to the establishment of the OECD Nuclear Energy Agency. Originally established as a group of governmental experts on nuclear third party liability issues, it was renamed the "Nuclear Law Committee" in 2000 to reflect its broadened mandate over the range of nuclear law topics and issues. The NLC is a highly focused group of specialists designated by the NEA member countries, comprising lawyers, policy makers, academics and from time to time, technical experts. Its terms of reference centre upon the interpretation, implementation, improvement and modernisation of the international nuclear liability regimes. It also provides a forum for discussions concerning the development and harmonisation of legislation on other aspects of nuclear law.

All the NEA member countries are members of the NLC. The European Commission participates in NLC meetings, based on the provisions of the OECD Convention and the NEA Statute. Representatives of the International Atomic Energy Agency (IAEA) also attend the meetings with the status of observers, based on a dedicated agreement. The following non-member countries and economies may be invited to attend the meetings of the NLC: Brazil, Bulgaria, China (including Hong Kong), India, Indonesia, Lithuania, South Africa, Chinese Taipei, Ukraine, the United Arab Emirates and Viet Nam.

In accordance with the NEA Strategic Plan for 2017-2022, the NLC will work to help ensure sound national and international legal regimes required for the peaceful uses of nuclear energy, including in the field of liability and compensation for nuclear damage, nuclear safety, international trade in nuclear materials and equipment, as well as public engagement.

A significant focus of the NLC is to encourage provisions for equitable compensation of damage in the event of a nuclear incident. In particular, the Committee is mandated to deal with issues relating to civil liability for damage caused by a nuclear incident and financial security mechanisms designed to ensure that funds will be available to compensate such damage. It addresses these issues in the context of member countries’ nuclear legislation as well as international nuclear liability instruments, including: 1) the 1960 Paris Convention on Third Party Liability in the Field of Nuclear Energy and the 1963 Brussels Convention Supplementary to the Paris Convention, as amended; 2) the 1963 Vienna Convention on Civil Liability for Nuclear Damage and the 1997 Protocol to Amend the Vienna Convention; 3) the 1988 Joint Protocol Relating to the Application of the Vienna Convention and the Paris Convention; and 4) the 1997 Convention on Supplementary Compensation for Nuclear Damage. The NLC will also strive to eliminate or minimise any legal impediments to the safe use of nuclear energy.

More specifically, the Committee has a mandate to:

i)   examine issues relating to the interpretation and application of international nuclear liability instruments, especially with respect to their harmonious application under member countries’ national laws and encourage broader adherence to those instruments with a view to fostering further progress towards a global regime of liability and compensation for nuclear damage;

ii)   develop recommendations concerning the Paris Convention and the Brussels Supplementary Convention (which were adopted under the auspices of the OECD Nuclear Energy Agency), as amended, for submission, if appropriate, to the Steering Committee for Nuclear Energy;

iii)   encourage the development, strengthening and harmonisation of nuclear legislation and regulation governing the safe and peaceful uses of nuclear energy, particularly in the areas of liability and compensation, nuclear safety, radioactive waste management and environmental law as applied to nuclear activities;

iv)   promote the harmonisation of national policies and legislation in the nuclear liability and compensation field amongst its member countries;

v)   promote the exchange of information and the sharing of experience between member countries on the above issues;

vi)   advise the Secretariat in its collection, analysis and dissemination of information on major developments in the nuclear law field at both national and international levels.

The NLC is also mandated to undertake all other work involving legal issues that may be entrusted to it by the Steering Committee for Nuclear Energy.

In the fulfilment of its responsibilities, the NLC will be supported by the staff of the NEA Division of Nuclear Law. The Committee will co-operate with other NEA standing technical committees. It may set up subsidiary bodies to facilitate the achievement of its goals, invite experts in other fields to attend its meetings and sponsor meetings of specialists

ALL EVENTS
Publications and reports
2
results

The Nuclear Law Committee (NLC) established the Working Party on Deep Geological Repositories and Nuclear Liability (WPDGR) in 2016 to assess how the existing nuclear liability regimes should apply to DGR projects.

The Nuclear Law Committee (NLC) established the Working Party on Nuclear Liability and Transport (WPNLT) in 2016 to address the practical challenges related to the nuclear liability regime(s) applicable to transport and transit of nuclear substances.

Working Party on the Legal Aspects of Nuclear Safety (WPLANS)

The Nuclear Law Committee (NLC) established the Working Party on the Legal Aspects of Nuclear Safety (WPLANS) in 2016 to support the NEA’s efforts to strengthen its work in the nuclear safety area.