One of the many important lessons learnt about nuclear safety over the years has been that safety culture is as important as any technical issue that may arise in the course of nuclear operations. 60 individuals from the Finnish nuclear community, including members of the nuclear regulator, and international observers from seven countries came together in Helsinki, Finland, on 6‑7 March to analyse country‑specific national attributes that may impact the safety culture. The event was organised by the NEA, in close co‑operation with the World Association of Nuclear Operators (WANO) and the Finnish Radiation and Nuclear Safety Authority (STUK). During his remarks at the opening session, NEA Director‑General William D. Magwood, IV, highlighted the importance of understanding the national context and its relation to safety culture in order to ensure continued enhancement of nuclear safety. A report about the forum and its outcomes is currently in preparation. 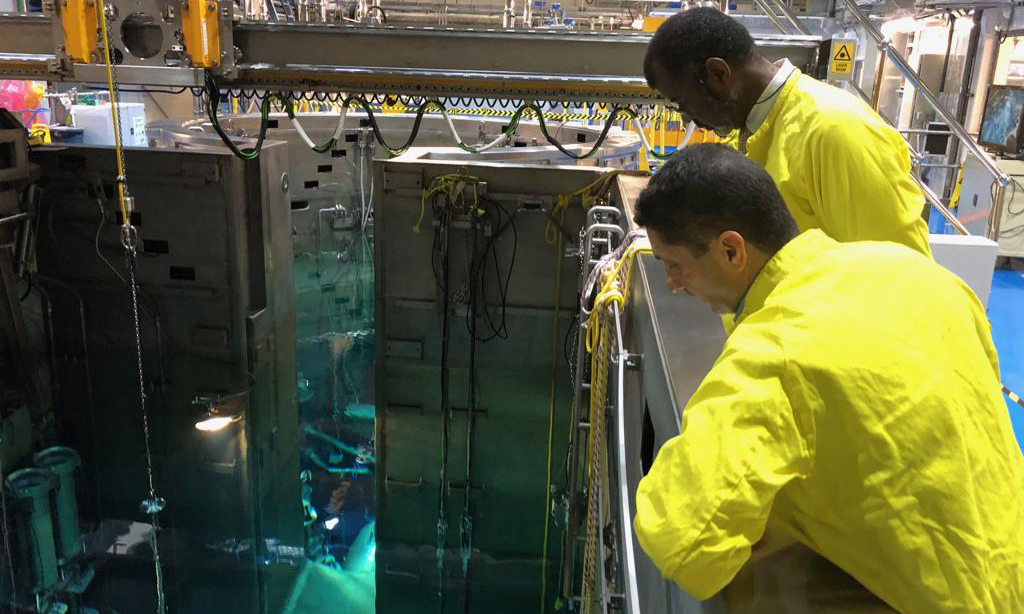 Nuclear skills and education is an increasingly important challenge for NEA member countries, all of whom need to have a new generation of highly‑qualified scientists and engineers to ensure the continued safe and efficient use of nuclear technologies for a wide range of industrial, scientific and medical purposes. The NEA has therefore developed the NEA Nuclear Education, Skills and Technology (NEST) Framework, which officially entered into force on 15 February. In partnership with 15 organisations from 10 member countries, NEST aims to nurture the next generation of nuclear experts who can provide the knowledge and leadership needed by the NEA membership in the years to come. The signatories to the Framework Agreement will convene in Paris on 28 March 2019 to discuss the implementation of the agreement and the first steps towards the development of NEST projects and activities. 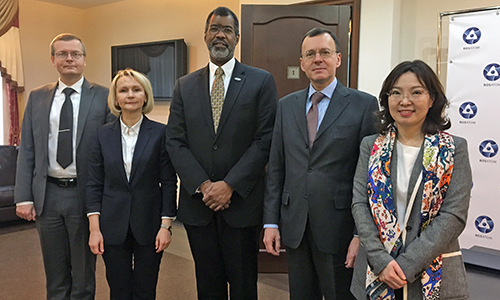 NEA Director‑General Mr William D. Magwood, IV and senior staff visited Russia on 15 February to meet with ROSATOM Deputy Director-General Nikolay Spasskiy and staff. Discussions with ROSATOM covered a wide range of issues, including ROSATOM's approach to human resource development, ROSATOM programmes for leadership development and capacity building for co‑operation with international organisations. Discussions also included future co‑operation on experimental support for fuels and material development and safety culture, as well as on a number of NEA initiatives such as the NEA International Mentoring Workshop in Science and Engineering and the country‑specific safety culture forum series. During this meeting, ROSATOM also confirmed their participation in the NEA Nuclear Education, Skills and Technology (NEST) Framework Agreement. Read more 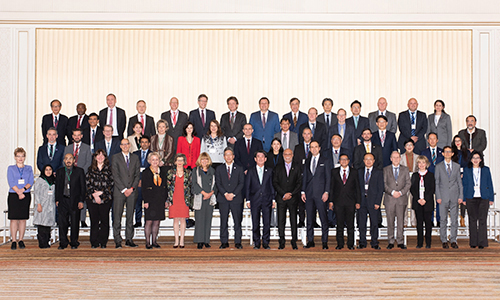 On 12-13 February, the NEA participated in the preparatory meetings for the G20 Ministerial Meeting on Energy Transitions and Global Environment for Sustainable Growth, which will be held on 15-16 June 2019. During the meetings, G20 countries discussed viable pathways, structural strategies and changes in transforming the energy sector towards zero-carbon energy systems. Dr Gloria Kwong, Deputy Head of the NEA Division of Radioactive Waste Management and Decommissioning, participated in the preparatory meeting and encouraged the G20 countries to engage in dialogue on developing final radioactive waste disposal solutions and contributed supporting information on nuclear energy. Another key contribution to the meeting was the recent NEA study scrutinising the costs of decarbonising the electricity sector and setting out a policy framework for achieving carbon emissions targets in the most cost-effective manner. Download the report here: oe.cd/nea-system-costs-2019 Bridging the gender gap in STEM

Despite progress over the past decades, women remain underrepresented in executive positions in science, technology, engineering and mathematics. Many countries are working to close the gender gap and to develop policies to reverse this trend. In this regard, the NEA launched a series of mentoring workshops in 2017 that aim to encourage young female students to pursue careers in science, technology, engineering and mathematics (STEM). These workshops provide the participating students with a rare opportunity to interact with accomplished women scientists and engineers from NEA member countries. The NEA encourages its membership to explore ways of attracting, recruiting and retaining women in science and technology. Watch the video here The Nuclear Innovation Bootcamp comes to Europe this summer

This year's Nuclear Innovation Bootcamp will take place from 19 to 30 August 2019 in Paris, France, hosted by the NEA, in collaboration with the French Nuclear Energy Society (SFEN), the University of Wisconsin‑Madison and the Nuclear Innovation Alliance (NIA). Launched in Silicon Valley three years ago, the Nuclear Innovation Bootcamp seeks to train students and early‑career professionals in skills essential to accelerating innovation in nuclear energy. The two‑week program will feature real‑world team projects, expert‑led sessions, and hands‑on activities to equip the participants with an in‑depth understanding of specific issues relating to nuclear innovation. The participants will also learn about venture fundamentals, markets, financing and the product development process. Applications may be submitted up until 15 May 2019. For more information, and to apply, visit nuclearinnovationbootcamp.org. Global Forum on Innovation for the Future of Nuclear Energy

The NEA is pleased to co-operate with the Electric Power Research Institute (EPRI), the International Atomic Energy Agency (IAEA), Korea Hydro & Nuclear Power (KHNP) and the United Kingdom National Nuclear Laboratory (NNL) to organise a Global Forum on Innovation for the Future of Nuclear Energy in Gyeongju, Korea, on 10-13 June 2019. The forum will bring nuclear power plant leaders, regulators and technology providers from around the world together in a collaborative environment to determine how innovative solutions can be more rapidly implemented in operating plants. It will focus on accelerating deployment of innovative solutions to address the most urgent challenges facing the current global fleet of nuclear power plants. Registration information is available at www.globalnuclearinnovation.com.

Radioactive Waste Management Organisations (RWMOs) have specific needs in terms of data and information that are required to manage radioactive waste repositories. The capacity must be made available within an RWMO to maintain the usability of relevant data and information over the long time frames corresponding to the lifetime of a waste facility, offering adequate support to meet possible regulatory requirements. Metadata can support these needs, as long as they are carefully planned and implemented. Find out more in the new NEA report on Metadata for Radioactive Waste Management at oe.cd/nea‑repmet‑2018. The eighth session of the NEA International Nuclear Law Essentials (INLE) course was held on 18‑22 February 2019 with a diverse international group of 49 professionals from 22 NEA member and non‑member countries. During the one‑week programme, the participants learned about the international nuclear law framework and major issues affecting the peaceful uses of nuclear energy. A total of 18 lecturers from the NEA, the International Atomic Energy Agency (IAEA), nuclear regulatory authorities and the private sector gave lectures on topics related to nuclear safety, security, non-proliferation and liability. NEA Director‑General Magwood and Commissioner Stephen G. Burns of the United States Nuclear Regulatory Commission (NRC) were both among the lecturers who spoke during the week. Read more about the INLE at oe.cd/INLE. Applications now open for the 2019
International School of Nuclear Law

The International School of Nuclear Law (ISNL) is a two‑week course designed to provide participants with a comprehensive understanding of the various legal issues relating to the safe, efficient and secure use of nuclear energy. Established by the NEA in 2001 in co‑operation with the University of Montpellier, this programme has provided a unique educational opportunity to more than 1000 graduate students and young professionals worldwide. The next session of the ISNL will take place from 26 August to 6 September 2019 in Montpellier, France. Applications may be submitted online up until 31 March 2019. For more information on the course and to apply, see oe.cd/ISNL.

The NEA Working Party on Scientific Issues of the Nuclear Fuel Cycle (WPFC) held its annual meeting on 6 February to review the status and progress of activities in each of its five expert groups. The participants noted the four reports that have been published over the last year, including the State‑of‑the‑Art Report on the Progress in Nuclear Fuel Cycle Chemistry, as well as the 15th Information Exchange Meeting on Actinide and Fission Product Partitioning and Transmutation (15IEMPT) was held in October 2018 hosted by the National Nuclear Laboratory (NNL) in Manchester, United Kingdom. They discussed the upcoming workshop on structural materials to be held on 8‑11 July 2019 in Kyoto, Japan, as well as the workshop on accelerator‑driven system (ADS) technology to be held on 14‑17 October 2019 in Antwerp, Belgium. The participants also revised the mandates of all expert groups and envisaged new cross‑cutting activities that could be developed with the other working parties of the NEA Nuclear Science Committee (NSC). New activities arising from the NEA Nuclear Innovation 2050 Initiative (NI2050), particularly on advanced fuel cycle (recycling and P&T) and advanced materials, were also suggested as part of the programme of work of the WPFC.