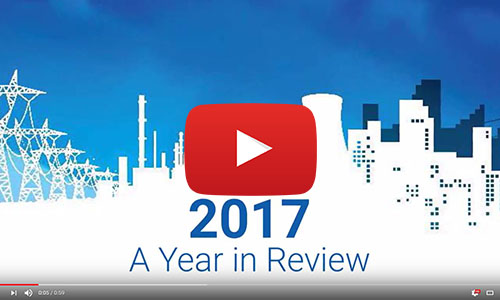 2017 was a very active and impactful year at the NEA. It has brought many milestones, including the accessions of Argentina and Romania to the NEA and its Data Bank. The NEA signed MOUs with the National Energy Administration of China, EPRI and WANO. It also organised many events, conferences and workshops corresponding to the needs of member countries in the application and exploration of nuclear science and technology, including the Workshop on Stakeholder Involvement in Nuclear Decision Making. Watch our year-in-review video to see the highlights and key moments of 2017. The NEA sincerely thanks all of you for following us and for being part of the NEA family. Watch our video here. 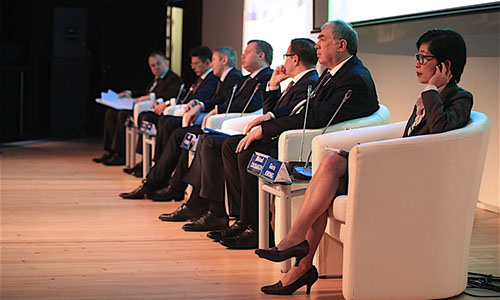 On 20-21 November 2017, the NEA participated in the International Public Dialogue-Forum and Exhibition AtomEco 2017 organised by Russian State Corporation ROSATOM and the Federal Environmental, Industrial and Nuclear Supervision Service (Rostechnadzor) in Moscow, Russia. Dr Gloria Kwong, Acting Head of the NEA Division of Radioactive Waste, was a featured speaker at the plenary panel session on "Clean Energy for Future Generations", and presented the role of the NEA in assisting member countries to achieve safe, sustainable and socially acceptable management solutions for radioactive waste. Other speakers on the panel included the Minister of Natural Resources and Environment Sergey Donskoy, Rosatom Director‑General Alexey Likhachev, the Chairman of Rostechnadzor Alexey Aleshin and the IAEA Deputy Director General Mikhail Chudadov. During the conference, the NEA also delivered two presentations on its current activities in nuclear decommissioning and the work of the NEA Crystalline Club which aims to study the long-term behaviour of hard granitic, crystalline rocks in hosting deep geological repositories for radioactive waste..

The NEA Committee on the Safety of Nuclear Installations (CSNI) has established a Senior Expert Group on Safety Research (SESAR) to recommend actions to be taken by the CSNI to facilitate broader use and sustained operation of research facilities essential to support nuclear safety. The new group held its first meeting in November 2017 and discussed the scope, output and timeframe for its work. Participating members decided that they would build on the assessments conducted over the past several decades by previous SESAR groups, reviewing the effectiveness of their recommendations and updating the conclusions to reflect more recent developments. In order to formalise the work plan, a mandate for the group will be proposed to the CSNI for approval at its December meeting. 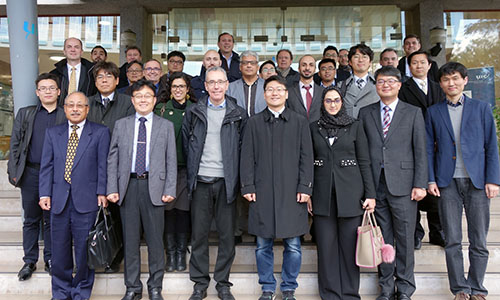 The second phase of the NEA Advanced Thermal‑hydraulic Test Loop for Accident Simulation facility (ATLAS) Project was launched with a meeting in Paris on 13-14 November 2017. The main objective of the ATLAS Project is to provide experimental data for resolving key LWR thermal-hydraulics safety issues related to multiple high-risk failures highlighted in particular by the Fukushima Daiichi nuclear power plant accident. The project uses the ATLAS facility at the Korea Atomic Energy Research Institute (KAERI), which simulates the primary circuit of an APR-1400 pressurised-water reactor at scales 1:2 in height and 1:12 laterally, and full pressure and temperature. During the second phase of the project, various accident scenarios will be simulated, including loss-of-coolant accidents (LOCAs). Novel systems for providing makeup cooling water during a LOCA in combination with station black out will also be tested. An important aspect of the test programme is to provide data for validating computer models. For that purpose, the facility has been upgraded with more detailed instrumentation, and analytical calculations will be performed in order to validate code predictive capability and accuracy of models. Seventeen organisations from ten countries are involved in the project, which will run through 2020. On 15-17 November 2017, the Joint NEA/IAEA Group on Uranium held a meeting in Paris. Forty-six delegates from thirty-one countries and representatives from the Euratom Supply Agency took part in the meeting and discussed the progress on the next edition of Uranium: Resources, Production and Demand. Participants from some countries reported that they would scale back uranium production at some mines and that some development plans were being delayed due to unfavourable market conditions. However, a review of nuclear development policies and new build plans continues to point to growth in global nuclear generating capacity through to 2035, particularly in Asia. Despite nuclear power phase-out policies in some European countries, uranium demand is expected to increase over the longer term.

Nuclear Energy Data is the Nuclear Energy Agency's annual compilation of statistics and country reports documenting nuclear power status in NEA member countries and in the OECD area. Information provided by governments includes statistics on total electricity produced by all sources and by nuclear power, fuel cycle capacities and requirements, and projections to 2035, where available. Country reports summarise energy policies, updates of the status in nuclear energy programmes and fuel cycle developments. In 2016, nuclear power continued to supply significant amounts of low-carbon baseload electricity, despite strong competition from low-cost fossil fuels and subsidised renewable energy sources. Three new units were connected to the grid in 2016, in Korea, Russia and the United States. In Japan, an additional three reactors returned to operation in 2016, bringing the total to five under the new regulatory regime. Three reactors were officially shut down in 2016 – one in Japan, one in Russia and one in the United States. Governments committed to having nuclear power in the energy mix advanced plans for developing or increasing nuclear generating capacity, with the preparation of new build projects making progress in Finland, Hungary, Turkey and the United Kingdom. Further details on these and other developments are provided in the publication’s numerous tables, graphs and country reports. Download the report at oe.cd/nea-data-2017 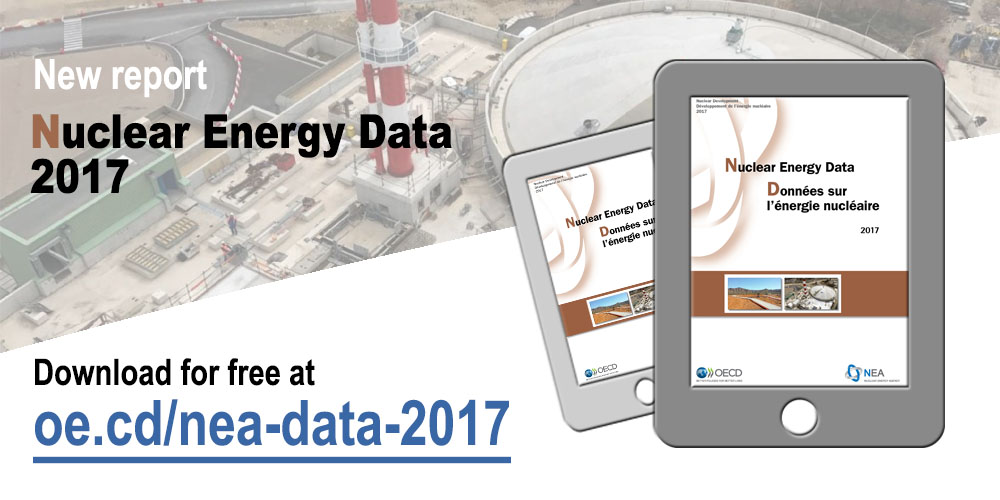 On 7‑8 November 2017, the International Framework for Nuclear Energy Cooperation held a conference on global supply chain and localisation issues and opportunities. The conference addressed the challenges and benefits associated with global and local nuclear supply chains, bringing together nearly 100 experts representing international organisations, regulatory bodies and the private sector. Participants agreed that while localisation can present benefits in terms of job creation and public support, it also introduces risks and possibly additional costs. There was consensus on the need for quality assurance and efficient regulatory oversight and inspection, as well as for industry self‑assessment and qualification. Conference presentations are available online on the IFNEC website and a summary report will be issued in early 2018.

A unique international platform for member countries to share their experiences in preserving records and knowledge of radioactive waste, and developing cultural heritage, the NEA initiative on the Preservation of Records, Knowledge and Memory (RK&M) across Generations met on 7‑9 November 2016. As the initiative will reach the end of its duration in April 2018, the participating experts reviewed the initiative’s work in progress and discussed outstanding work areas, as well as plans to execute remaining work. They approved the release of the RK&M Key Information File (KIF) Concept Report and agreed to document all key findings in two additional reports: a report on the set of essential records for deep geological repositories (SER) and a final project report. 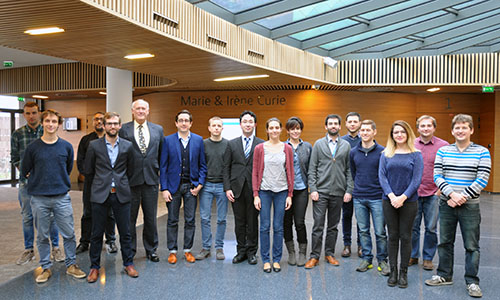 On 20‑24 November 2017, the NEA Data Bank hosted its bi-annual Nuclear Data Week to promote co-operation among experimentalists, nuclear data evaluators and end users of nuclear data. Organised within the framework of the Joint Evaluated Fission and Fusion (JEFF) Nuclear Data Library activity, NEA Nuclear Data Week aims at fostering ties among various nuclear data expert communities. For the November 2017 edition of the NEA Nuclear Data Week, which was attended by nearly 120 experts, the JEFF and the European Commission's CHANDA (Solving Challenges in Nuclear Data for the Safety of European Nuclear Facilities) projects collaborated to host a joint Nuclear Data Workshop to kick off the week. Among the highlights of the five-day technical programme was the release of the latest JEFF-3.3 neutron library. In conjunction with the event, the NEA also organised its first training course on the NJOY2016 Nuclear Data Processing System with 15 students from seven member countries.